Winter has given us the perfect excuse to catch up on all the boxsets we’ve been putting on hold. Of course, along with a juicy storyline, at allbeautyHQ, our key passion is always going to be how the stars get their look. So grab your popcorn and come with us on a journey of the very best beauty our favourite Box Sets have to offer!

Spanning seven seasons, Mad Men is set in the golden age of Advertising on Madison Avenue, covering over a decade of iconic American Pop Culture moments from March 1960 to November 1970.

The main protagonist is the cool and elusive Don Draper – but key in the style stakes are Joan Holloway (Christina Hendricks) and Betty Draper (January Jones). These two ladies lead very different lives but showcase the very best beauty looks from the time period.

Where to find it : Amazon Prime 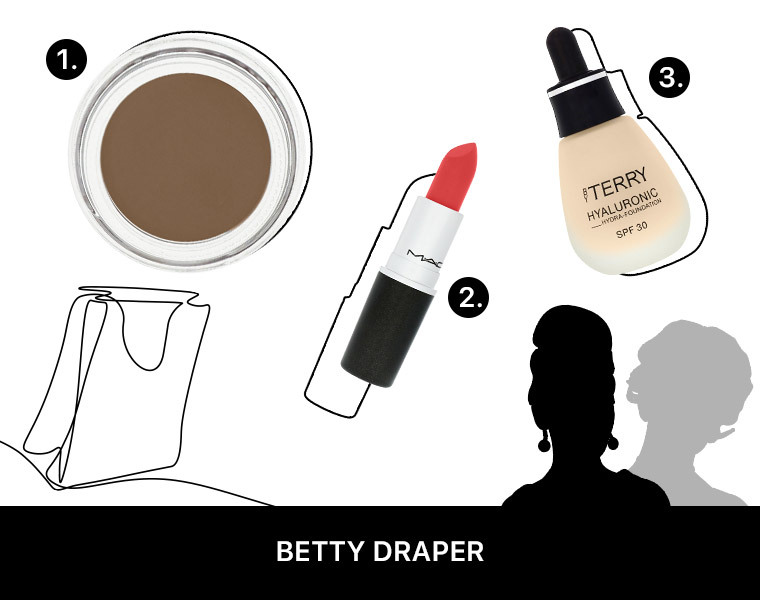 1.Accentuate your brows like Betty Draper and give them the perfect prominent arch with Anastasia Beverly Hills Dip Pomade in Blonde.

3.Get a luxe and flawless base like Betty with ByTerry’s Hyaluronic Hydra Foundation. 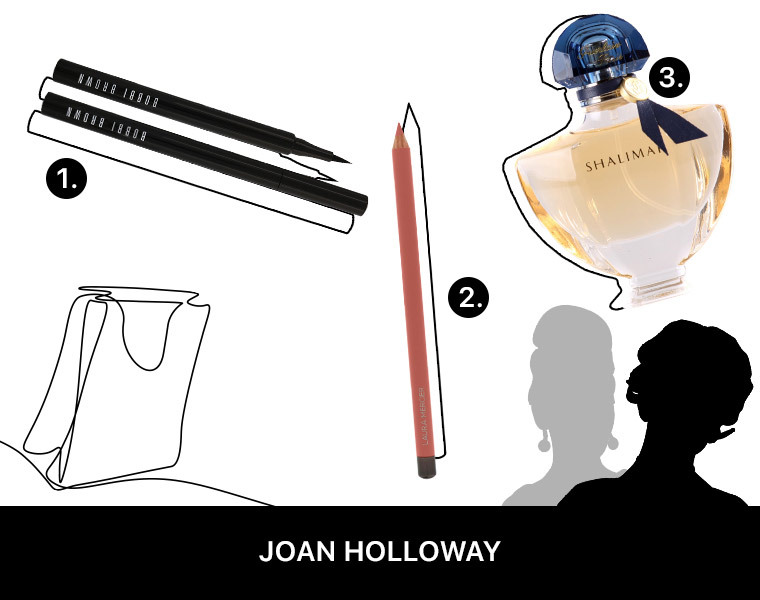 1. Liquid liner is used throughout the series to get the sweet 60’s cat eye look. We can’t resist a touch of Bobbi Brown for an effortless yet high precision line.

3. We’re lucky enough to find out Joan’s fragrance of choice in the series directly from her – this is revealed to be Shalimar, a classic oriental scent.

If you haven’t yet been introduced to the dark and brooding world of Riverdale, then you’re in for a treat, as you can find 5 seasons of this Archie Comics inspired show on Netflix. Key characters include Archie and Jughead, as well as the strong female leads Betty Cooper, Veronica Lodge and Cheryl Blossom. All appears to be perfect on the surface – but everyone can have a sinister secret or two!

Where to find it : Netflix 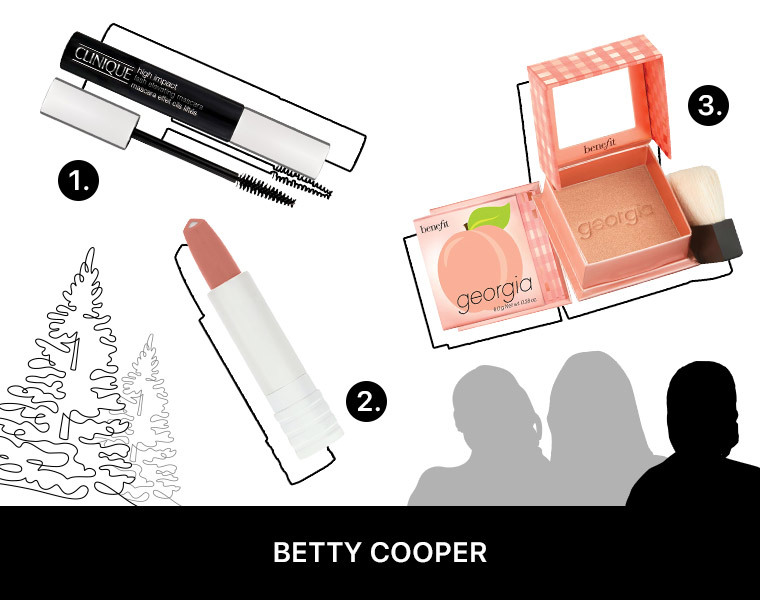 1. Ever wondered what the secret was to Betty’s lashes? Lilli Reinhart goes for the “beautiful finish” of Clinique’s High Impact Lash Elevating Mascara.

3. Get a Betty Cooper Peaches and Cream complexion with a swish of benefit’s Georgia on the apples of your cheeks. 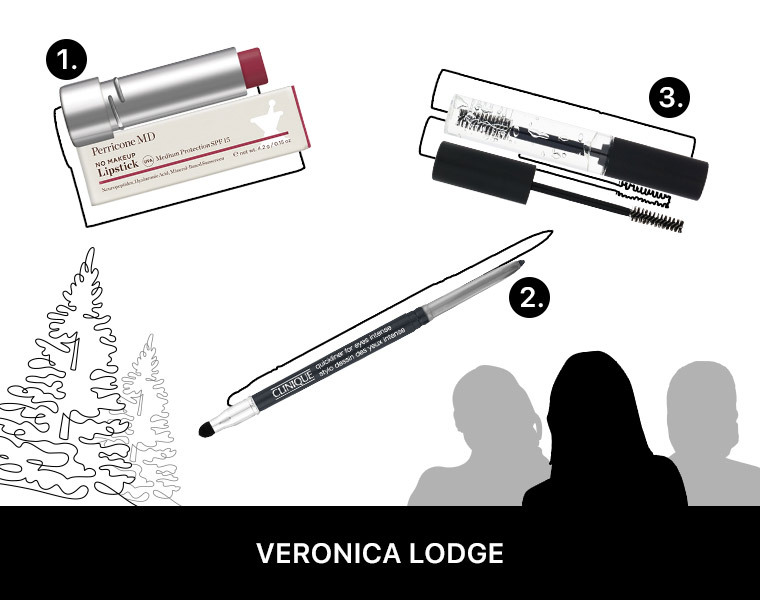 1. A bold berry lip will always seal the deal in style – we’ve chosen Perricone MD in Cognac to get the Lodge look.

2. Smoke and line that eye with Clinique Quickliner for Eyes Intense for a look worthy of La Bonne Nuit, Veronica’s underground speakeasy. 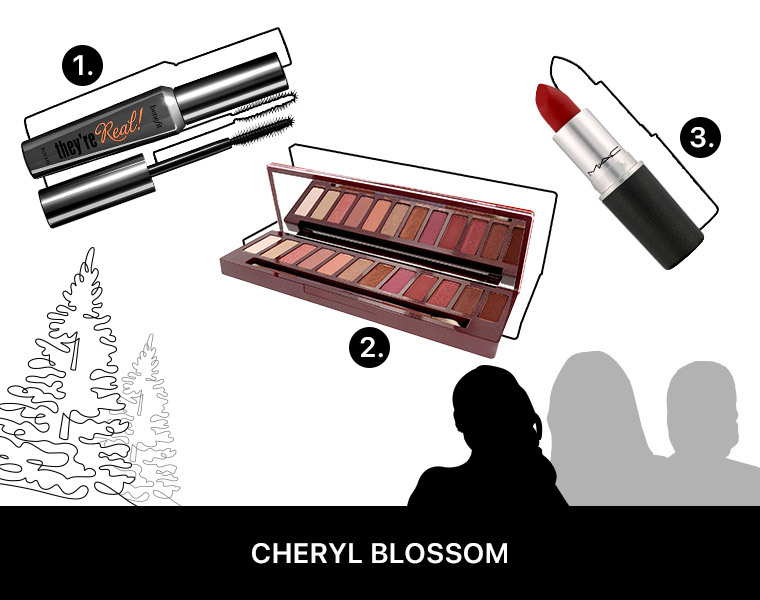 1. For a bombshell lash, look no further than They’re Real, the mascara used to lengthen Cheryl’s luscious lashes.

3. Head cheerleader with luscious auburn locks, you don’t mess with Cheryl Blossom – make a statement like Cheyl with a signature red lipstick such as M.A.C Ruby Woo.

Game of Thrones was originally a series of fantasy novels titled A Song Of Ice And Fire. Released in 2011 with a final episode airing in 2019, this is one to watch if you’re a fan of epic cinematic drama. Featuring an epic roster of characters and filmed in Croatia, Ireland, Malta and Morocco (amongst other locations) this is definitely a true escape into fantasy!

We mentioned the abundance of characters but have focused on one of the ultimate fan favourites – Daenerys Targaryen, Khaleesi & Mother of Dragons, portrayed by the one and only Emilia Clarke.

Where to watch : Amazon Prime 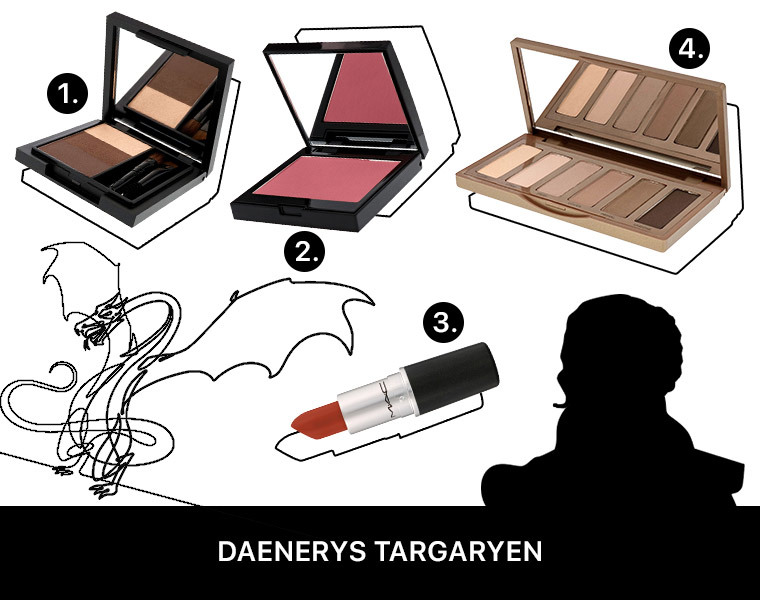 1. For a brow worthy of Khaleesi, go for M.A.C Great Brows in Lingering.

2. Get a look that is lit from within with Laura Mercier’s Sangria Blush

3. Apply M.A.C’s Marrakesh lipstick with your fingertips for a fresh just bitten lip look that pays homage to one of the series’ filming locations – Morocco.

4.Create expressive eyes like Daenerys by defining your crease with the Urban Decay Basics 2 Palette

Well we couldn’t help but wonder… what would an article on Beauty Escapes be without a nod to Carrie Bradshaw, the fictional newspaper columnist played by Sarah Jessica Parker. Sex and the City was one of the series that defined the early noughties and is due to be rebooted (without Samantha Jones portrayed by Kim Cattral) as a new series And Just Like That.

We couldn’t resist looking at some beauty products the original gang would definitely have used when getting ready to hit the nightlife of the Big Apple.

Where to find it : Amazon Prime

2. Always one for a tongue in cheek remark and a love of all things luxe, Samantha would definitely be a fan of Tom Ford’s sultry (and high end) fragrances. Her 2021 go to? Rose Prick.

4. Do you have a mane like Carrie ? Maintain your wild curls with the luxe Davines Love Curl Shampoo.

An all new series for 2021, WandaVision forms part of the Marvel Cinematic Universe. Wanda, also known as Scarlet Witch, has telepathic powers and lives in a seemingly perfect Black and White Sitcom world in Suburbia. All is not as it first seems as we see her look quickly transition by the decade in a matter of minutes. Whilst the ending is yet to be revealed, we love the sharpness of her monochrome look.

Here’s our tips on how to get the best look for black and white photo capture – the main secret being contour! Did you know? Actress Elizabeth Olsen, who plays Wanda is the younger sister of the iconic Olsen Twins, Mary-Kate and Ashley.

Where to watch it : Disney+ 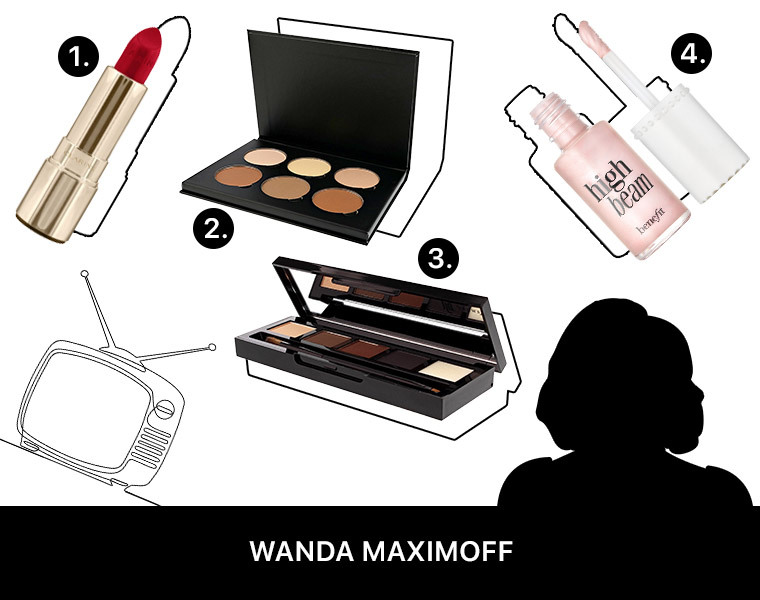 1. Light up the screen with the glossy brilliance of Clarins Joli Rouge Brilliant Lipstick

3. This HD Brows Palette in Vamp was MADE for vampy monochrome brows.

4. Get a galactic beam with benefit’s award-winning highlighter High Beam

Launched in December 2020, Bridgerton has been at the top of our list of series to watch! Phoebe Dynevor (daughter of Coronation Street’s Sally, who knew?!) and Regé Jean Page star as Daphne Bridgerton and the Duke of Hastings respectively. They live a gilded life, under the scrutiny of Lady Whistledown, Regency England’s answer to Gossip Girl.

To get a glow worthy of Daphne Bridgerton, also known as the Diamond of the Season, look to illuminating powders and light blushes.

Where to watch it : Netflix 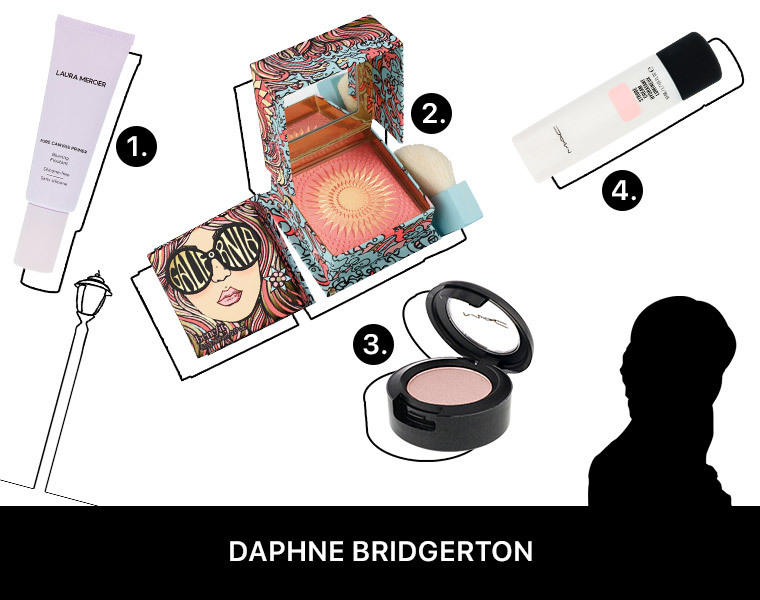 2. Want pretty blushed cheeks? No need to be shocked by the tales of Lady Whistledown when you can fake a flush with benefit’s Galifornia Golden Pink Blusher.

4. Set the ballroom floor a glow with your radiance – apply M.A.C Strobe Cream in Pinklite to your cheekbones!

Who could have predicted that a series on Chess would have been one of the top series of 2020? Based on Walter Tevis’ novel, Anna Taylor-Joy stars as Beth Harmon, an orphan with a prodigious talent for Chess. Set in the 1950s-60s, the mini-series sees Beth becoming an unlikely star of the Chess world – whilst also facing personal struggles.

Where to watch it : Netflix 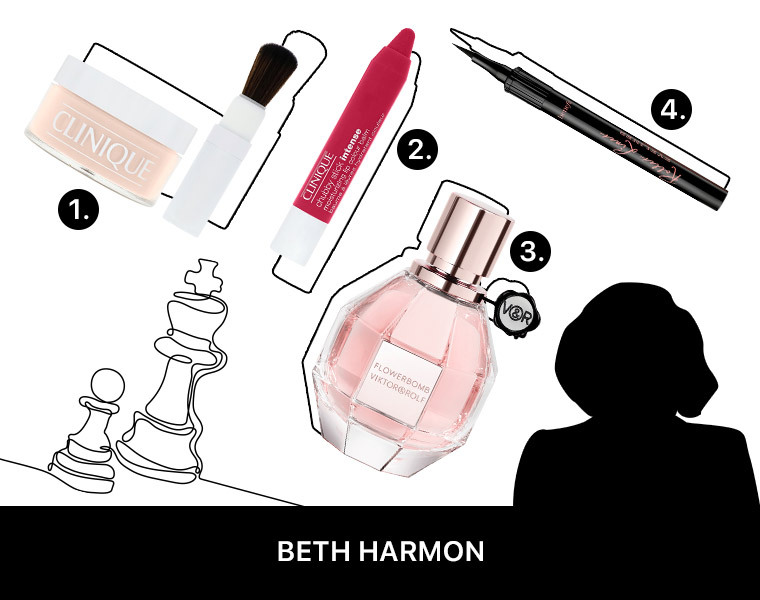 1. Clock ticking on your chess time? Maintain your composure like Beth and go for a flawless complexion with Clinique’s Blended Face Powder & Brush.

2. Say CHECKMATE with a red lip – we love Clinique’s ChubbyStick in Mightiest Maraschino.

3. Did you know? Actress Anna Taylor Joy is the current muse of Viktor & Rolf and stars in their campaign for Flowerbomb Midnight. We think Beth would love the original Viktor & Rolf Flowerbomb fragrance in its delicate but impactful packaging!

We’re not talking about the 80s’ Epic here, although Joan Collins, if you’re reading this – we love you. In this 2017 remake of Dynasty, set in Atlanta, the Carringtons and the Colbys return to feud over money, power… and love.

The character of Fallon Carrington is a spoilt heiress with fierce fashion and business acumen. Played by Elizabeth Gillies, you can’t help but root for this unlikely heroine as she tries to push through her schemes for power over her family dynasty.

Where To Watch It : Netflix 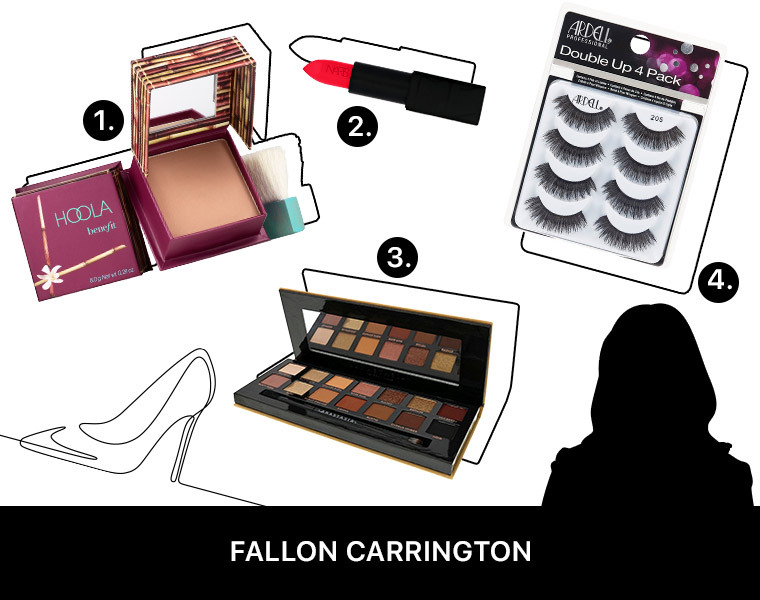 2. Be audacious like Fallon with a bold red lipstick. NARS Audacious Lipstick in Annabella does the trick!

3. Play up blue eyes with the orange and bronze toned shades of the Anastasia Beverly Hills Soft Glam Palette.

4. Fallon often flutters her eyelashes to get what she wants – embellish your own Bambi lashes with the Ardell Multipack Double Up 4 Pack

Something is happening in the picture perfect town of Rosewood…

Four girls who used to be friends find themselves drawn together once again after they begin to receive mysterious texts from “A”. The only “A” they all have in common – their missing, presumed dead, former bestie Alison DeLaurentis. Will she be returning to take back her crown of Queen Bee?

This 7 series saga will keep you on the edge of your seat right until the very end!

Where to watch : BBC IPlayer 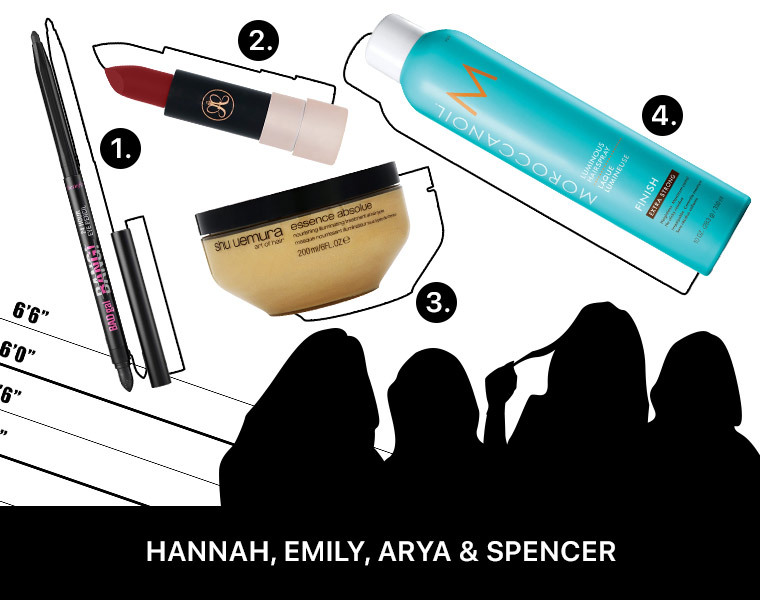 1. We first meet Hanna as the new Queen Bee of the gang. Set secrets have revealed that she gets her feisty look from benefit’s BadGal liner.

3. Spencer never has a hair out of place – all thanks to Shu Uemura. Our go to? Shu Uemura’s Essence Absolue Mask.

4.  How does Emily achieve such flawless beachy waves? According to Teen Vogue, the on set stylist used MoroccanOil Luminous Hairspray to set her hair in place.

Now the only question that remains is – which series will you be starting first?