The allbeauty quick guide to Jean Paul Gaultier fragrances for men and women.

Jean Paul Gaultier, the iconic designer and enfant terrible of fashion, is responsible for one of the most successful designer-fragrance crossovers to date. His first fragrance, Classique, launched in 1993 (originally titled Jean Paul Gaultier Eau de Parfum) and was made for women. Described as an “elegant, oriental, floral fragrance” with top notes of anise, orange blossom and tangerine, naturally it was an instant hit.

The huge success of Classique was followed by Le Mâle, the fragrance for men, in 1995, which was loved both for its scent as well as its ‘tin can’ outer packaging. Both fragrances continue to hit the topseller mark, notably at Christmas and on Valentine’s Day.

Gaultier continued to produce fragrances on a regular basis and in 2005 the unisex “fragrance for humanity” Gaultier² (pronounced Gaultier to the power of two) was launched, a beautiful mixture of vanilla, amber and musk, blended through a smoke screen of incense and myrhh. 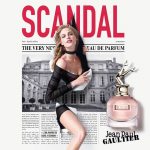 2017 saw a flurry of excitement with the release of Scandal, a deliciously naughty scent that mixes elegance with the scandal of Pigalle! With notes of honey, blood orange and patchouli, Scandal is set to be our new favourite.

allbeauty stocks a wide range of fragrances for men and women by Jean Paul Gaultier, all at fantastic prices with worldwide delivery.