A Journey Through Scent : Perfume Through The Decades

In honour of National Fragrance Week (although let’s be honest – at allbeautyHQ, we’re more about the fragrance LIFE),  come with us as we take a deep dive into some of the top scents that have defined days gone by.

Experts in Neuroscience have confirmed that scent, memory and emotion are closely intertwined. Just a hint of a key fragrance can sometimes transport you for a split second to a 90’s dance floor, a holiday retreat or to the embrace of someone special….

Emotion and memory – sometimes it’s easy to get swept up in the power of nostalgia! Every era, of course, has its superstars that cut through the noise of each decade. So if you’re ready to get lost in the world of fragrance with us, strap in, because it’s going to be quite the adventure.


Imagine being in the 50’s on Madison Avenue and opening up your newspaper to see a perfume ad….

When you think of timeless legendary fragrances there are two that ultimately spring to mind – Chanel’s eponymous No.5 and Guerlain’s seductive Shalimar.

Chanel No.5 was famously associated with Marilyn Monroe’s iconic interview in Life Magazine in 1952.

But did you know that it was actually created in 1921 – making this amber nectar a veteran of over 100 years old?

As one of the best-selling perfumes in the world, it’s far from being “an old lady scent” – it is a sophisticated fragrance composed of Rose de Mai, Jasmine, Aldehydes and Bourbon Vanilla.

Gabrielle Chanel herself advised that her perfume was to be applied “wherever you would like to be kissed”.  Sultry!

Shalimar by Guerlain, meanwhile, is described as being a “mythic” fragrance. Originally created in 1925, it is named after The Gardens Of Shalimar, the location of a love story between Emperor Shahjahan and his wife Mumtaz Mahal. The perfume’s notes consist of Mandarin Orange, Lemon, Bergamot, Jasmine, Rose De Mai, Tonka Bean, Vanilla, Iris, Peru Balsam and Grey Amber.

Flash forward to the 70s and the avant-garde came into play with YSL’s Rive Gauche. French for the “Left Bank”, this name represents the left side of Paris’ River Seine.

The Left Bank was famous in the 70s for being bohemian, as well as being the HQ of YSL’s new boutique.
You’ll note that this fragrance has a bold bottle design – in fact, it is famous for being presented in a tin can package, rather than in a classic pretty “dressing table” design.

From Boho to Rock and Roll – YSL had another 70s hit, which was decidedly more edgy. Before Black Opium…. There was YSL Opium for Women. Controversially named, Opium was launched in 1977. Designed to be lush, opulent, languid and scandalous, it was so successful that it sold out on its launch date. One of the top ten best selling perfumes in France (along with Chanel No 5), the ad campaign featured American model (and wife of Rolling Stone, Mick Jagger) Jerry Hall.

The 1980s were bold, brash and overstated – so it’s no wonder that the fragrances of this era are wonderfully luxe and audacious.


Coco by Chanel was launched in 1984. Created by perfumer Jacques Polge, notes include Bulgarian Rose, Coriander, Peach, Jasmine, Mimosa, Amber, Civet, Opoponax, Vanilla and Labdanum. This fragrance was named after the nickname of Chanel label founder – Gabrielle “Coco” Chanel. It took on prominence again in the ‘90s when French singer and model, Vanessa Paradis became face of the fragrance as “Coco, The Spirit of Chanel”.

Calvin Klein Obsession (1985) is a powerful and spicy oriental fragrance which takes on the theme of romantic obsession.

Its notes consist of Vanilla, Basil, Bergamot, Peach, Sandalwood, Amber, Musk and Vetiver. Kate Moss became the face of the fragrance in 1993 – and the rest is history, as the fashion world would soon become obsessed with Kate. 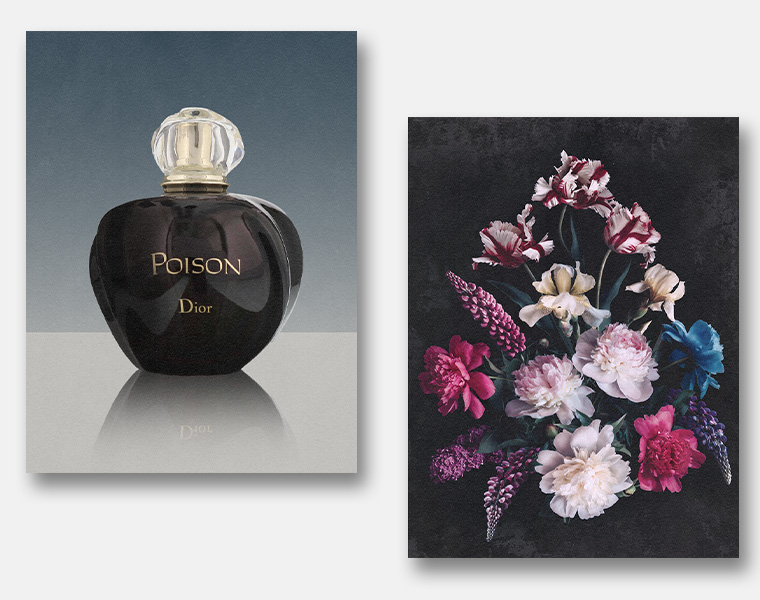 Another fragrance which took the 1980s by storm was Dior Poison – a provocative fragrance launched in 1985. This strong scent was the winner of a Fifi award in 1987 and features notes of Plum, Brazilian Rosewood, Incense, Coriander, Orange Honey, Opopanax, Orange Honey and Tuberose. Once you’ve smelt Poison, you’ll be tainted forever (in a good way, you’ll never be able to forget it!).

Of course, with the dawn of a new decade, Yves Saint Laurent was at the ready with a fresh scent. 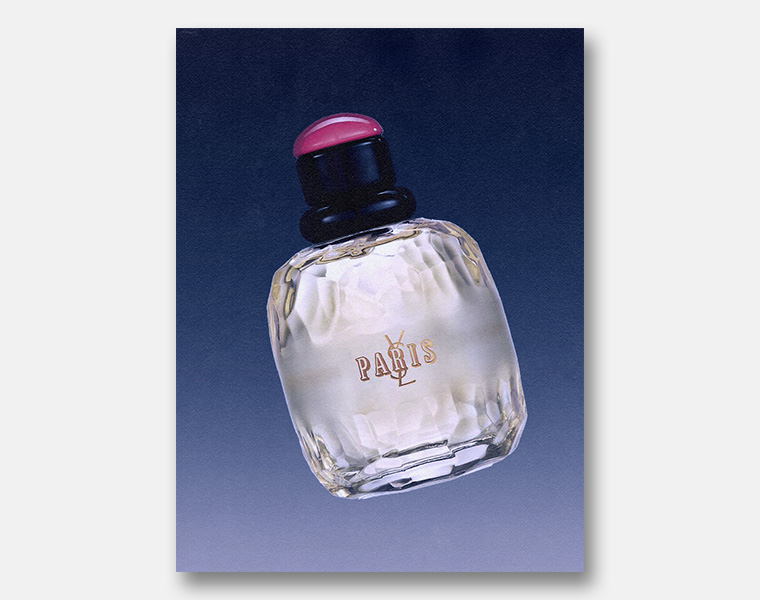 In 1983, the city of Paris was commemorated by Yves Saint Laurent – in the form of YSL Paris. This heady floral scent is a full bouquet – containing notes of Rose, Mimosa, Hyacinth, Geranium, Nasturtium, Orange Blossom, Hawthorn, Violet, Lily, Jasmine, Lily-of-the-Valley and Iris, amongst others. Created as a tribute to the simple elegance of Parisians, this is a vivacious and romantic fragrance. Definitely one to wear with a Kir Royale in hand, as you enjoy the sparkle and spontaneity of Parisian life.


The 90s saw fragrance become a bit more whimsical, with the advance of unusual bottle designs and creative blends.

This was the era that would be defined by Brit Pop, Supermodels and Girl Power – and the fragrances of the 90’s were confident, classy and not afraid to make a statement.

The inclusion of new note, Ethyl Maltol, was a revolutionary note that changed the fragrance game and started a gourmand fragrance trend. Shaped in the form of an irregular star, Thierry Mugler was said to have stated that “every star has its own guardian angel and every woman is an angel”.

The power and beauty of women was further celebrated when Jean Paul Gaultier Classique was launched in 1993.

Described as a fragrance “which promises pleasure”, its seductive strapline was complemented by an unusual bottle design – the torso of a femme fatale strapped in a JPG corset. Its Floral Oriental notes include Orange Blossom, Star Anise, Pear, Bergamot, Ylang-Ylang, Ginger, Iris, Plum, Musk and Sandalwood.

The 2000s took the concept of the playful bottle and turned it into collectible treasure.

Described as “an explosive floral bouquet”, 2005’s Viktor&Rolf Flowerbomb contains the essence of over a thousand flowers – including Cattleya Orchid, Osmanthus, African Orange Flower, Sambac Jasmine, Freesia and Centifolia Rose. Presented in a crystal cut grenade bottle, this scent will whisk you away into a sweet scented floral paradise.

On the other side of the spectrum, the amber woody aroma of Mugler Alien is one that has tantalised many a nose over the noughties. Designed for those who believe in the extraordinary, this refillable purple powerhouse is inspired by the beauty of talismans and was launched in 2005, 13 years after Angel’s iconic star shaped bottle.


With a bottle evocative of summer sunshine and good times, 2007’s Daisy by Marc Jacobs was all about becoming a Daisy Girl.

A popular choice for teenagers growing up in the noughties, it’s clear to see why this simple yet vibrantly optimistic fragrance remains an iconic fragrance choice today.

The daisy flowers on the top of the bottle only add to the fragrance’s charming appeal. Its sparkling notes include Violet Leaf, Blood Grapefruit, Strawberry, Violet, Gardenia, Jasmine, Musk, White Woods and Vanilla.

Remember Opium from a few paragraphs back? 2014 gave the Opium girl a modern and edgy makeover, with the launch of a new scent in a glittering black bottle.

Lancôme is renowned for its La Vie Est Belle fragrance ranges – it went a step further in 2019 by creating a new fragrance, designed for women who dare to dream and defy expectations.


Lancôme Idôle, launched in 2019, is the first fragrance for some time to target a younger audience and fanbase for the brand. Featuring Zendaya (famous for Spiderman and Euphoria), as its face, this scent has Rose, Jasmine and White Chypre amongst its notes.

Launched in 2011, Prada Candy is candy by name, candy by nature. Unapologetically bold, this pink and gold Amber Vanilla fragrance has distinctive gourmand notes.  Creamy White Musk, Benzoin and Caramel are blended together to create a sweet cocktail that is simply irresistible. Give us a bite of candy, please!

Have you ever considered fragrance as an extension of your identity? As we approach the end of our journey, the last two fragrances we’ve chosen to define the 2010’s celebrate women who choose liberty and freedom of expression.

Winner of a Cosmopolitan Beauty Award in 2018, Chloé Nomade is a fragrance which “encapsulates the spirit of a woman open to the beauty of the World”. Created by the fashion house originally founded by Gaby Aghion, the Chloé brand celebrates sustainability and possessing a free spirit. This free spirited nature is reflected in the ingredient notes of this floral chypre fragrance – Oak Moss, Cherry Plum and Freesia.

One thing is for sure, wherever the wearer of this fragrance wanders, she is sure to bring a sense of calm and natural beauty.

Fronted by the iconic Dua Lipa, 2019’s YSL Libre is another fragrance which celebrates freedom – with a name which translates to Free in French. Presented in a couture bottle, with structured yet unexpected golden accents, this is a statement accessory, adorned by an oversized YSL logo flipped on its side. The fragrance notes feature a combination of Moroccan Orange Blossom contrasted with Lavender, a note that is traditionally used in male perfumery.

With well over 4000 fragrances for men and women at allbeauty, it would be easy to continue writing all day about iconic scents. But, alas, as we’ve hit the 2020’s, it’s time for us to rejoin the present day… and start planning for launches of iconic future fragrances!